Kinect Adventures! uses full body motion to allow the player to engage in a variety of minigames, all of which feature jump-in, jump-out multiplayer play.

Kinect Adventures! uses full body motion to allow the player to engage in a variety of minigames, all of which feature jump-in, jump-out multiplayer play.

Each minigame lasts about three minutes.

While most of the minigames are co-operative in two player mode, Reflex Ridge is a competitive game.

At many points during the game, Kinect’s RGB camera takes photos, which are shown to the player(s) and saved to a storage device.

These can then be viewed within the game, with the option of uploading these to a private repository on Kinectshare.com

and downloaded to a computer or uploaded to social networking sites.

The object of all the minigames is to get the highest number of adventure pins, which are collected in different ways. Adventure pins earn the player(s) medals which, in story mode, affect progression. Medals can be bronze, silver, gold and platinum, in order from least to most pins needed to acquire each.

As a pack-in game, Kinect Adventures! also contains features which aid users in proper set-up and use of the Kinect sensor. 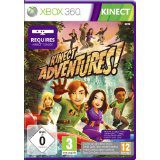 In 20,000 Leaks, the player’s avatar is in a glass cube underwater. The player positions his or her limbs and head to plug cracks as crabs, fish, and bosses such as sharks and swordfish cause cracks and holes in the cube. As difficulty increases, up to five leaks must be plugged at a time to earn Adventure pins. Each game consists of three waves, which end when time expires or when all leaks are plugged. Extra time left over at the end of each wave is added to the Adventure pin total.

In River Rush, one or two players stand in a raft and work together to pick up the adventure pins scattered throughout the winding rapids. The raft is controlled by stepping left or right to steer, and by jumping to jump the raft. There are many secret places that you can get to by taking ramps. There are considerably more adventure points there than on the river. Crashing into barrels, wood, markers, or rapid markers, causes the player to lose points.

Reflex Ridge is a track-and-field inspired game, but played on a moving platform in an environment similar to a wooden roller coaster or minecart. One or two players (in split screen) race on a platform, jump over hurdles, lean away from obstacles, and limbo to avoid hitting their heads on low beams. Jumping in place makes the platform move faster along its rail. Adventure pins are earned by avoiding obstacles or touching ones scattered throughout the course. The game is timed, with extra time left over at the end of the course added to the Adventure pin total.

In Space Pop, transparent balls (soap bubbles) shuttle between holes on the walls, floors and ceilings of a virtual zero-gravity room. The player attempts to pop the bubbles by touching them to earn Adventure pins. Space Pop utilizes depth, requiring the player to move toward and away from the sensor. To move upwards, the player can flap his or her arms, and to stay at current height, hold arms out to the sides.