Band Hero features over 60 master recordings from some of the hottest bands of today and yesteryear.

See Below for a Full list of songs available in Band Hero.

Brought to you by the makers of Guitar Hero, one of the best-selling video game franchises of all time, Band Hero features the hottest chart-topping hits from everyone’s favourite acts including Taylor Swift, No Doubt, Lily Allen, The All-American Rejects and Jackson 5. Headlined by some of the biggest names in music as in-game artists and playable characters, Band Hero is the ultimate party game to play on the road or at home, where players of all ages will be able to experience the signature, easy-to-learn but difficult-to-master Guitar Hero gameplay.

Music sensation Taylor Swift joins forces with Band Hero for the ultimate family music gaming experience. Taylor Swift, global music sensation and best selling artist of 2008, will ascend an all-new virtual stage this November in Band Hero. Budding music stars, their families and friends, will all live their musical fantasy on the Band Hero stage, playing as Taylor Swift or alongside the singer/songwriter and guitarist, as she performs her smash-hits “Love Story” and “You Belong With Me” from her latest album Fearless as well as “Picture to Burn” from her self-titled debut record.

Adam Levine joins Taylor Swift as an exclusive, in-game playable character by lending his popular likeness to Band Hero. Fans will be able to play as Levine as he rocks out to the Grammy nominated “She Will Be Loved,” Maroon 5’s hit single from their debut album Songs About Jane, which has sold more than 10 million copies worldwide and is Gold and Platinum in more than 35 countries.

The Song List
Band Hero features over 60 master recordings from some of the hottest bands of today and yesteryear. Some of the songs players can expect to be cranking through with their bands are: 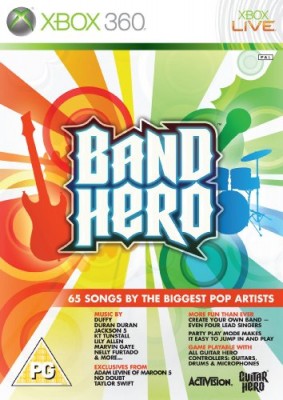