For the first time ever, fans finally get the chance to fill the coveted role of a Ranger, an elite task force who protect Pokémon. Players can become a fully-fledged Pokémon Ranger by being invited to Fall City to learn from Spenser, one of the top Ranger leaders.

For the first time ever, fans finally get the chance to fill the coveted role of a Ranger, an elite task force who protect Pokémon. Players can become a fully-fledged Pokémon Ranger by being invited to Fall City to learn from Spenser, one of the top Ranger leaders. As they embark on the life of a licensed Ranger, players will learn to use the powers of captured wild Pokémon to solve problems, help people and protect nature from adverse effects.

As a player begins the adventure they select either Lunick (male) or Solana (female) as their chosen character. They are then transported to the Rangers Base where they will receive a series of exciting and challenging missions to complete. As experience is gained, the missions increase in importance. The Ranger is pitted against the Go-Rock Squad in an attempt to recover Professor Hastings’ stolen Super Styler – the newly developed version of the Capture Styler used to hold wild Pokémon. 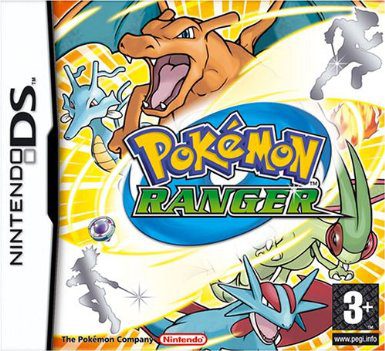 The Rangers don’t embark on their epic journey alone. To help them along their way they are also accompanied by a single partner Pokémon. This helpful friend will remain with them at all times aiding the all important relationship between the Ranger and captured wild Pokémon, whose power they will need to harness in the challenges ahead of them.

For the first time in a Pokémon game, players can control the Pokémon Ranger using only the Nintendo DS touch screen. To capture a valuable wild Pokémon the player must draw circles round their target with the stylus, though this challenge varies depending on the size and power of the Pokémon. Once captured, the Ranger’s partner Pokémon facilitates the use of the wild Pokémon’s powers to solve problems and clear obstacles that they might encounter.

A wild Pokémon’s powers aren’t available forever though. The player must choose the right moment to use the power because once used, the Pokémon is released back into the wild. A captured Pokémon can help a player by providing either a Poké Assist or a Field Move. In a Poké Assist a player can use an already captured Pokémon to capture another. In Field Move the Pokémon is used to clear an obstacle in the new Ranger’s path.

As the game progresses, the Ranger’s Capture Styler, used to hold the wild Pokémon, becomes more powerful. This provides more energy (Meter) allowing more Pokémon to be held with them at any one time. The wild Pokémon captured all provide different powers, depending on the group they belong to. Groups available include Grass, Fire, Electric, along with many more. As the game progresses, the challenge of capturing the correct Pokémon becomes increasingly strategic with various group match-up advantages and disadvantages influencing their assistance to the player.

The fun doesn’t end with the main mission either, with numerous sub-quests available giving players the opportunity to meet and capture legendary Pokémon like Kyogre, Groudon and Rayquaza. With these and over 200 other Pokémon waiting to be caught, completing your Browser will be no easy task. Do you have what it takes to ‘Catch em all’ and earn the Certificate of Completion.