Warhammer Underworlds: Nightvault is an action-packed combat game for two players. Build your warband, construct your deck, and defeat your rivals.

Warhammer Underworlds: Nightvault is an action-packed combat game for two players. Build your warband, construct your deck, and defeat your rivals.

Shadespire was once a city of wonder and magic, a mercantile metropolis whose rulers defied death, to the fury of Nagash. During the height of the city’s powers, rivals, thieves and would-be conquerors were locked away in the sprawling dungeon known as the Nightvault. 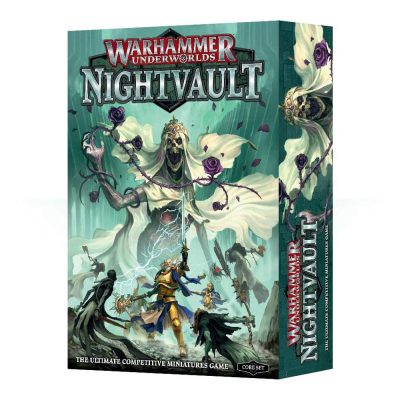 After the city’s fall, Nagash broke open the chains that bound the shackled spirits within, giving them weapons to freeze the hearts of the living and enough memory of their torment to fill them with hatred and jealousy. The spectral dead delight in the chance to inflict this hatred upon the living, and the streets of Shadespire echo to the sounds of terrifying screams and cruel, mocking laughter…

The Game In Warhammer Underworlds, you and your opponent pick a warband – 2 are included in this box – and build a deck of power and objective cards. After placing your warband on the hex-tiled game boards, you take turns making actions – movement and attacks – until 3 phases are played. Between actions, you can use the power cards to introduce effects and reactions that can swing the battle in your favour; building the best deck you can and using cunning to deploy these abilities at the perfect time is the secret to mastering the game and dominating your foe.

Merely vanquishing your opponent’s warband does not guarantee victory – capturing objectives, standing your ground, making the best tactical choices and deploying the right cards at the right time will gain you the glory points you need to win!Once you’re familiar with the rules, games will take around 30 minutes – you’ll always have time for a rematch.