They started life as construction vehicles taken by early colonists during the first stages of space exploration. The first colonies settled, and slowly over time, they devolved into feudal states ruled by aristocratic nobles. Their knights evolved into walking suits of armour showing off house colours. Equipped with powerful weapons, the Knights were used to defend their lands and provided security against enemies such as marauding Orks and land-hungry Eldar Exodites.

Knights are the epitome of a houses honour, power and wealth. Being chosen to pilot such creations is a great privilege, even if the pilot is typically the master of the house of their heir. 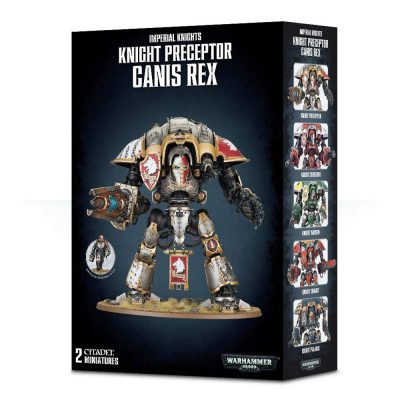 Although Imperial Knights are much smaller and less powerful than a full sized Titan, their size makes them far better suited to the mobile style of warfare prevalent amongst the nobility of their native Knight Worlds. These colossal mechanoid war machines can turn the tide of a battle.

Canis Rex is a Freeblade Knight like no other, capable of being added to any Imperial Knight Army without removing the bonuses of your Household Traditions.

In battle Canis Rex fights like a Knight Preceptor with a super-powered thunderstrike gauntlet, with the added ability to be able to jettison pilot Sir Hekhtur to keep him in the fight even after his Knight is destroyed.

This kit is fantastic value as it is capable to be built into 1 of 7 different Imperial Knight variants. Rules for Canis Rex can be found in Codex: Imperial Knights.