Call of Duty Advanced Warfare delivers a Call of Duty experience like no other on Xbox 360.

Call of Duty: Advanced Warfare envisions the powerful battlegrounds of the future, where both technology and tactic have evolved to usher in a new era of combat for the franchise. Delivering a stunning performance, Academy Award-winning actor Kevin Spacey stars as Jonathan Irons – one of the most powerful men in the world – shaping this chilling vision of the future of war. 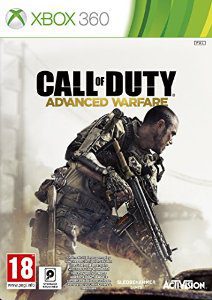 The exoskeleton system: Every soldier is equipped with an exoskeleton including a feature set that enables more tactical freedom than ever before. Boost Jump introduces verticality to the Call of Duty experience, allowing players reach high points quickly and navigate maps in new ways. Other new mechanics include Boost Dodge, Boost Dash, and re-imagined melee.

Customisation and rewards: Inspired by the fan favourite ‘Pick Ten’ system, Create-a-Class gives players more options than ever before to customise load outs for all styles of play. In addition to selecting all weapons, perks, and attachments to create a load out, score streaks have been added to the mix for an extra layer of personalisation – and three extra slots.

All soldiers will now be fully viewable in multiplayer lobbies. Not only does the Virtual Lobby allow players to show off all of their custom weaponry and equipment, but it also allows them to select and evaluate enemies’ load outs while preparing for the upcoming match.

Exo Survival is Call of Duty: Advanced Warfare’s chaotic, fast-paced cooperative mode that pits you and up to three friends against increasingly challenging waves of enemies, ranging from soldiers and ASTs to dogs, drones, and more.

Players will start by choosing from three Exo tiers – Light, Heavy, and Specialist – each of which has pros and cons, catered to various play styles. As players progress from one level to the next, enemies will become increasingly challenging, and some will even have new abilities.

After completing each wave, the player will earn upgrade points allowing them to customise their character with new weapons, abilities, and attachments. Occasionally, a round will challenge the player to undertake an additional assignment, such as collect dog tags or diffuse EMP bombs, to earn bonus upgrade points.

Complete the task and earn the points, but fail to complete the task before the round is over and the player will face even steeper challenges in the next round. Jump into the fray with your friends, and see how long you can survive.