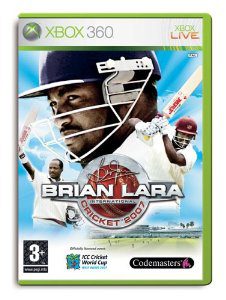 In addition to players, the game leads with a dedicated ICC Cricket World Cup 2007 mode featuring all the official teams, stadia, kits and equipment of the tournament. Further modes include a fully licensed ICC Champions’ Trophy competition and exhibition matches including One Day Games, Test Matches and exciting 20-over run fests. When you want to get competitive for real, Brian Lara International Cricket 2007 delivers online competitive play on PC (LAN and online) and Xbox Live.

Brian Lara International Cricket 2007 adds extra depth to the series’ complete batting, bowling and fielding experience whilst retaining its trademark accessible playability. The acclaimed batting play sees the introduction of subtle edges, sweepshots and the ability to use your feet to dance down wicket and smash the ball over the boundary for six.

Bowling sees a much-improved set of delivery types, thanks to changes in the way the ball swings in the air and reacts off the pitch, showcasing Shane Warne’s huge variation of spinning deliveries and Steve Harmison’s raw pace and even reverse swing as the ball degrades. In Fielding, there’s a new reflex-testing slip catch system and players can now be run out at both ends and be stumped by alert wicket keepers.

A striking advancement is the photo-realistic visuals; with hundreds of real player likenesses being modelled in high detail, complete with animated facial expressions to capture the intensity and emotion of international cricket. Stadia, including all eight official World Cup venues, have also been created with a new level of textured detail and they make use of proprietary shader technology for realistic, subtle and changing lighting effects, such as time of day and weather.