WWF Raw is a professional wrestling video game based on the television show of the same name produced by the World Wrestling Federation (WWF), released for the SNES, 32X, Mega Drive/Genesis, and Game Boy in late 1994 and early 1995 by Acclaim Entertainment.

WWF Raw is a professional wrestling video game based on the television show of the same name produced by the World Wrestling Federation (WWF), released for the SNES, 32X, Mega Drive/Genesis, and Game Boy in late 1994 and early 1995 by Acclaim Entertainment.

It is the sequel to the WWF Royal Rumble game that was released in 1993, and is the final part of LJN’s 16-bit WWF trilogy. Players can play either One-on-One, Tag Team, Bedlam, Survivor Series, Royal Rumble, or a Raw Endurance Match. Unlike its predecessor, WWF RAW is multitap compatible.

WWF RAW introduces differences between the characters in that they not only have their own signature moves, but differing move sets altogether (including new over-the-top “mega moves”). The game adds many moves not seen in the previous games, such as a DDT, a fallaway slam, and various types of suplexes. Additionally, wrestlers differ in attributes of speed, strength, stamina, and weight.

The game itself is arcade-like and involves a “tug-of-war” system in which, when the wrestlers lock-up, a meter appears above them and players must repeatedly press buttons to pull the energy away from the opponent’s side to theirs. 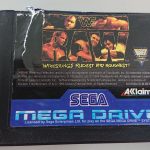 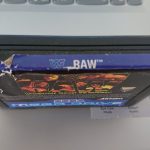 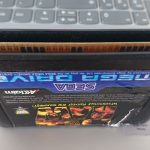 With more energy, they can perform moves with greater impact. Once an opponent’s energy is low enough, a player can perform a wrestler’s unique signature move.

In a One-on-One match, two wrestlers (one player versus the computer or two players) square off for a face-to-face bout. One Fall, Brawl, and Tournament variations are available. One Fall matches feature an in-ring referee and are contested under standard rules. Victory is achieved by a 3-count pinfall or a count-out if a wrestler stays outside of the ring for a full ten-count.

In a Brawl, however, the referee is absent. This allows unlimited time outside the ring and illegal moves such as eye raking and choking are allowed at all times. The Brawl match doesn’t require a pinfall to win; instead, the first player to be entirely drained of their stamina submits in defeat. In a Tournament, a player must battle through the entire roster in a series of One Fall matches to win the championship belt.

A Tag Team match is made up of two teams of two wrestlers (if two players are involved, they can choose to either control opposite teams or be on the same team against the computer). Whenever one wrestler gets tired, they can tag in their partner. A wrestler on the apron can grab an opponent if they get close to the ropes, allowing their partner to attack them.

One Fall, Brawl, and Tournament configurations are available. In a standard tag team match, if an illegal wrestler is in the ring for a full 10-count, his/her team will be disqualified. Otherwise, the same rules for the singles One Fall and Brawl matches apply to tag team matches.

In the tag team Tournament mode, either one player or two cooperative players will choose two wrestlers to form a team and then must defeat the remaining wrestlers in a series of One Fall tag team matches to win the tag team championship.
Luna Vachon takes on Yokozuna in an intergender match (Super NES version).

A Survivor Series match is also similar to a Tag Team match. Instead of only 2 members on each team, a team can consist of up to four wrestlers. It is also elimination style, in which a team is only victorious when all the opponents’ teammates have been eliminated by pinfall, submission, countout, or disqualification.

Only one partner can appear on the apron at one time, but the player can change outside partners via a button command.

When the One Fall option is enabled, characters cannot perform chokes and eye gouges. But if the referee gets knocked down, these attacks will be enabled until he recovers. However, the match can not end until the referee is able to count pin attempts or ring outs.

If the referee is knocked down too many times, he will walk out of the ring. The match will then continue under Brawl rules.

Applying certain holds to opponents which have no stamina will result in them giving up. This will not work in the Royal Rumble.

The Royal Rumble begins with two wrestlers, and more adversaries enter until six wrestlers are in the ring. Additional wrestlers enter as others are eliminated. There are no holds barred and elimination occurs when a wrestler is thrown out of the ring. A wrestler must be worn down before they can be thrown out, unless they’re caught running with a hip toss or back body drop, or knocked off the top turnbuckle.

In most cases, a Mega Move will instantly eliminate an opponent if they connect. The last wrestler remaining in the ring after all twelve have entered wins the match. At the end of a Royal Rumble, score rankings are shown giving a wrestler’s total time in the ring along with a list of opponents they eliminated.

A Bedlam match is similar to a Tag Team match, except both team members are allowed in the ring at the same time (essentially a “Tornado” Tag Team match). A team must defeat both members of the other team to win the match.

A Raw Endurance match is a mix between a Survivor Series and a Bedlam. The player picks his first wrestler, then up to five more partners. The choosing of partners is optional, meaning a player can choose to go in with as much as a 6-on-1 handicap. The first team to eliminate all the members of the other team wins the match.