The gameplay is based on traversing a number of levels while collecting gold rings and attacking enemies.

Sonic the Hedgehog 2 was met with critical acclaim, with reviewers praising the visuals and gameplay while criticizing the high difficulty. In 1993, a sequel, Sonic Chaos, was released.

As the game was released before the Sega Genesis version, it represents the debut of character Tails, who would become a mainstay in the series.

Whilst the Master System version of the game was not initially released outside Europe and Brazil, it later become available worldwide following its release on the Wii’s Virtual Console in 2008. 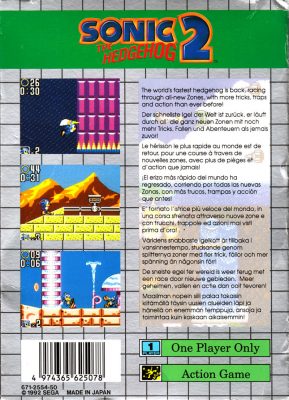 Like the previous games, players control Sonic the Hedgehog as he makes his way through each of the game’s seven zones, fighting against various badniks and overcoming deadly obstacles.

By collecting rings, Sonic can protect himself from damage against enemies and obstacles (with the exception of pitfalls and drowning), with extra lives earned for collecting 100 rings.

Unlike the previous 8-bit title, Sonic is now able to recollect some of his rings for a limited time after being hit. Other technical improvements allow Sonic to smash through certain walls and run through loops.

Also added to this iteration are gameplay mechanics unique to certain zones, such as riding a mine cart, using a hang glider to glide across the air, skimming across the surface of water and floating inside giant bubbles to reach higher areas.

Unlike the previous game, the game no longer features the Shield and Restart Marker items, so if Sonic loses a life, he must restart at the very beginning of the act.

Each of the game’s seven zones consist of three acts, the third of which consists of a boss battle (most of which now consist of animal-based robots as opposed to direct confrontations with Dr. Robotnik) in which the player is not given any rings to collect.

At the end of each of the first two acts, players can potentially earn bonuses such as additional rings, lives and continues by fulfilling certain criteria upon hitting the act’s goal post, such as having a specific amount of rings. In the first five zones, a Chaos Emerald is hidden somewhere within the second act.