Lion King on Sega Game Gear is a side-scrolling platform game in which players control the protagonist, Simba, through the events of the film, going through both child and adult forms as the game progresses.

The Lion King is a platformer video game based on Disney’s animated film of the same name. The game was developed by Westwood Studios and published by Virgin Interactive Entertainment for the Super NES and Genesis in 1994, and was also ported to MS-DOS, Amiga, Game Gear, Master System, and Nintendo Entertainment System.

The game follows Simba’s journey from a young cub to the battle with his evil uncle Scar as an adult.

The Lion King is a side-scrolling platform game in which players control the protagonist, Simba, through the events of the film, going through both child and adult forms as the game progresses. 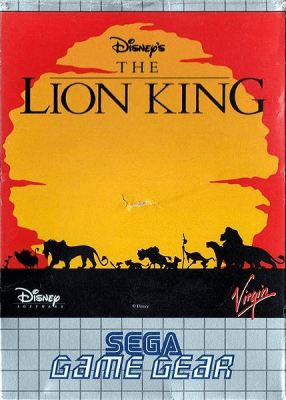 In the first half of the game, players control Simba as a cub, who primarily defeats enemies by jumping on them. Simba also has the ability to roar, using up a replenishable meter, which can be used to stun enemies, make them vulnerable, or solve puzzles.

In the second half of the game, Simba becomes an adult and gains access to various combat moves such as scratching, mauling, and throws. In either form, Simba will lose a life if he runs out of health or encounters an instant-death obstacle, such as a bottomless pit or a rolling boulder.

Throughout the game, the player can collect various types of bugs to help them through the game. Some bugs restore Simba’s health and roar meters, other more rare bugs can increase these meters for the remainder of the game, while black spiders will cause Simba to lose health.

By finding certain bugs hidden in certain levels, the player can participate in bonus levels in which they play as Timon and Pumbaa to earn extra lives and continues.

Pumbaa’s stages have him collecting falling bugs and items until either one hits the bottom of the screen or he eats a bad bug, while Timon’s stages have him hunting for bugs within a time limit while avoiding spiders.