Puggsy is a 1993 puzzle-platform video game developed by Traveller’s Tales and released by Psygnosis on Mega Drive and Mega-CD consoles, and on the Amiga home computer.

Puggsy is a 1993 puzzle-platform video game developed by Traveller’s Tales and released by Psygnosis on Mega Drive and Mega-CD consoles, and on the Amiga home computer.

Puggsy is the name of the title character, an orange space hopper-like alien who landed his spaceship on The Planet, intending to return home until his spaceship was stolen by the raccoon natives of the planet. 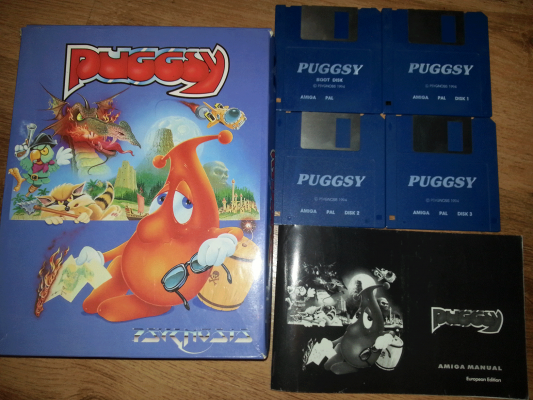 Gameplay is mostly a cross between a normal platform game, with the usual style of platformer enemies and a variety of means to kill them, and a puzzle game of sorts where Puggsy is often required to find objects, and either carry them to a specific location or somehow use them in order to complete levels.

There are also a variety of objects that have power-up effects, such as allowing Puggsy to be hit once or twice without dying, speeding him up or making him temporarily invincible, and objects that while not necessary, can be temporarily helpful, such as a variety of guns (most of which have limited ammunition which can often not be refilled).

Objects react on a clever physics based system, which was an innovative feature at the time. The system allows objects to be thrown, or to topple if stacked without care.

Each object also has a different weight. Another effect of this is that Puggsy can carry stacks of objects along a flat surface, but a slope will often cause all items except the bottom one (held by Puggsy) to topple and scatter.

Also, any objects carried out of the level exits give different score values, or in the case of the heart object, an extra life. Other objects are extremely varied, including shells, weights, matches, keys, balloons, cups, barrels, clue-giving chests, knives, and candles.