A number of things instantly strike you when you first play Shift 2 Unleashed. Chief among them being the realistic feel, which complements the looks – you get a great sense of gradient-changes on the tracks, the controls feel fantastically responsive, and cars are launched into the air if you clatter kerbs, just like their real-life counterparts would be.

The critically acclaimed SHIFT franchise returns to the track with SHIFT 2 UNLEASHED. The most immersive racing experience to date brings the True Driver’s Experience to life with all the intensity and exhilaration of being behind the wheel and competing in the Driver’s Battle. From the all-new helmet cam to night racing to frighteningly real physics and crashes, SHIFT 2 UNLEASHED delivers all the violence and excitement of race day in a groundbreaking authentic racing experience.

For centuries the wind has been viewed as nature’s paradox with its ability to be both gentle and powerful. The newly-unveiled Pagani Huayra, named after the Andean God of Wind, reflects this dichotomy and will be available exclusively in SHIFT 2 UNLEASHED and Need for Speed in 2011, the latest entry to the critically acclaimed Need for Speed simulation series.

The team at Slightly Mad Studios has perfectly recreated the form and function of this year’s most notable new supercar. From its elegant body shape to its commanding 700 HP engine, SHIFT 2 UNLEASHED is the first videogame where players will feel the white knuckle intensity of racing the Pagani Huayra at speeds of over 230 mph. SHIFT 2 UNLEASHED is this year’s most authentic racing game which races onto retail shelves on 1st April.

“For the past seven years, the designing of the Huayra has been a labor of love and I’m ecstatic to be working with the entire Need for Speed team to help share our creation with the world,” said Horacio Pagani, founder of Pagani Automobili S.p.A. “I’ amazed by how accurately they have been able to capture the look and, most importantly, the feel of the Huayra. SHIFT 2 UNLEASHED will give enthusiasts all over the world the opportunity to get behind the wheel of the Huayra.”

SHIFT 2 UNLEASHED takes the innovative rivalry-generating Autolog technology pioneered by Need for Speed Hot Pursuit and connects friends, and competitors, together in head-to-head races and player statistic match-ups to add new layers of depth and detail to the intricate customization and tuning of the simulation series. Players can take the revolutionary true driver’s experience to the next gear with an all-new rendering engine and graphics overhaul, innovative helmet camera, night racing, and authentic degradation of cars and environments. 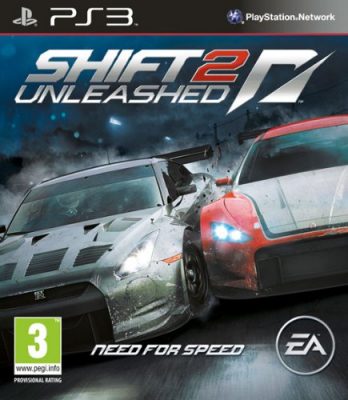 Fun though arcade-style racing games are, true petrol-heads crave a level of realism that delivers a much truer evocation of the adrenaline-generating rush of real-life motor racing. So they should be happy to discover that Shift 2 Unleashed provides exactly that. It’s essentially a racing sim, with a physics engine that represents the state of the art (although that doesn’t mean it excludes those born without the sheer talent of a Lewis Hamilton or Jenson Button, as driver assists are on hand until you develop the bravery to crank it up to the Elite difficulty level). But whereas most racing sims adopt a clinical look and feel, Shift 2 Unleashed ratchets up the atmospherics to a heart-pounding level.

Not only does it communicate an incredible sensation of speed, using clever visual tricks like motion-blur, but it has a full damage engine, turning your every indiscretion into a dinged or crumpled body panel. And then there’s the innovative Helmet Cam, the most true-to-life representation of the view a real racing driver enjoys in the cockpit – which cleverly apes drivers’ sight-lines by, for example, homing in on the apex as you approach a corner. Not to mention proper night-driving – a first for a videogame – with rigorously modelled headlights cutting through the darkness. It’s safe to assume that non-virtual drivers booked in for their first 24-hour races will be using it to find out just what to expect on a real-life night-time stint.

A number of things instantly strike you when you first play Shift 2 Unleashed. Chief among them being the realistic feel, which complements the looks – you get a great sense of gradient-changes on the tracks, the controls feel fantastically responsive, and cars are launched into the air if you clatter kerbs, just like their real-life counterparts would be. Of course, Shift 2 Unleashed features most of the finest tracks on the planet – Australia’s legendary Bathurst is new, along with Shanghai, among old favourites like the Nordschleife and Brands Hatch – and a mouth-watering selection of machinery, including the yet-to-be-driven Pagani Huayra. You can indulge your FIA GT fantasies, too, as Shift 2 Unleashed incorporates the premier endurance racing formula’s official licence – unsurprisingly, given that a Need For Speed team competes in its GT3 class.

It becomes most obvious that Shift 2 Unleashed operates under the Need For Speed umbrella when you play it online. That’s because it includes the mighty Autolog, as seen in Hot Pursuit – which has been significantly upgraded since Hot Pursuit. This time around, it has a Facebook-style Wall, and as before, it lets you compete against your friends’ best times, even when they (or you) aren’t online. Shift 2 Unleashed’s Autolog implementation dynamically tracks the career progress and personal best times of you and your friends (so it’s always bang up to date), and makes it much easier to share and compare snapshots and videos of your best moves, crashes and so forth. Plus, of course, it lets you set up your own customised online races and challenges.

If you reckon you’re truly serious about motor-racing, then you’ll find that Shift 2 Unleashed is just what you’ve been seeking. It’s a proper petrol-head’s dream.