Battlefield Bad Company 2 brings the spectacular Battlefield gameplay to the forefront of next-gen consoles and PC.

Get ready for the most spectacular FPS multiplayer experience ever! Battlefield Bad Company 2 brings the spectacular Battlefield gameplay to the forefront of next-gen consoles and PC – featuring best-in-class vehicular combat set across 8 huge sandbox maps each with a different tactical focus. New vehicles like the All Terrain Vehicle (ATV) and the UH-60 transport helicopter allow for all-new multiplayer tactics in the warzone, extensive tuning ensures that this will be the most satisfying vehicle combat experience to date. Tactical destruction is taken to new heights with the updated DICE ‘Frostbite’ engine. Players can now take down entire buildings or create their own fire points by blasting holes through cover, thereby delivering a unique experience in every match

Players can also compete in 4-player teams in 2 exclusive squad-only game modes, fighting together to unlock exclusive team awards and achievements. Spawn on your squad to get straight into the action, and use gadgets such as the tracer dart in-conjunction with the RPG to devastating effect. Excellence in the battlefield is rewarded with an extensive range of pins, insignias and stars to unlock along with 50 dedicated ranks to achieve. Variety also extends into the range of customisable kits weapons and vehicles available. With 4 distinct character classes, 46 weapons, 15 gadgets, 13 character specializations and over 15000 kit variations to discover and master players will be able to fine-tune their preferred fighting style to give them the edge in combat.

All of these features combine to deliver spectacular and unpredictable action moments found nowhere else in the genre. Battlefield Bad Company 2 is all-out multiplayer warfare at its absolute finest!

The modern battlefield is evolving and once again “B” Company are caught on the front line. Already one of the most popular online shooters ever, this latest game adds greater variety and greater destruction than ever seen before.

For the first time you will be able to raze buildings to the ground, with almost every object on the map being completely destructible. It’s not just the scenery that takes damage more realistically though, as this is the first Battlefield game since Vietnam to feature blood wounds.

Despite all the new vehicles, weapons and specialist equipment though the game is more accessible than ever with preset equipment kits that let you choose a basic style of play (assault, engineer, recon or medic) and immediately get started. With an improved single player and story mode too this is ready to take its place as one of the definitive online shooters of modern times. 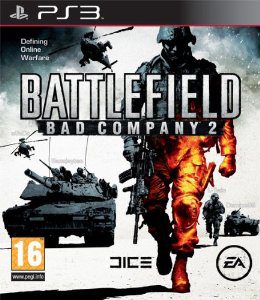