When your game begins, Richard the Lionheart has just recaptured the port city of Acre from occupying Saracens. With a base of operations established, the Crusaders prepare to march south.

Assassins Creed is set in 1191 AD, when the Third Crusade was tearing the Holy Land apart.

Shrouded in secrecy and feared for their ruthlessness, the Assassins intend to stop the hostilities by suppressing both sides of the conflict.

In Assassins Creed players, assuming the role of the main character Altair, will have the power to throw their immediate environment into chaos and to shape events during this pivotal moment in history. In Assassins Creed

In Assassins Creed your story follows a disgraced master Assassin (ALTAIR) who embarks on an epic quest to restore his status within the Assassin Order.

After failing to assassinate the Templar Leader (ROBERT DE SABLE) and recover the legendary Templar Treasure, Altair is demoted to Uninitiated (the lowest rank in the Assassin order).

SINAN, Leader of the Assassins, offers our hero an opportunity to redeem himself. Altair must venture out into the Holy Land and assassinate men said to be exacerbating and exploiting the hostilities created by the Third Crusade. In doing so, he will stabilize the region, allowing Sinan to usher in an age of peace.

When your game begins, Richard the Lionheart has just recaptured the port city of Acre from occupying Saracens. With a base of operations established, the Crusaders prepare to march south.

Their true target is JERUSALEM – which they intend to recapture in the name of the Church. However, SALADIN, leader of the Saracen Army, currently rules Jerusalem. 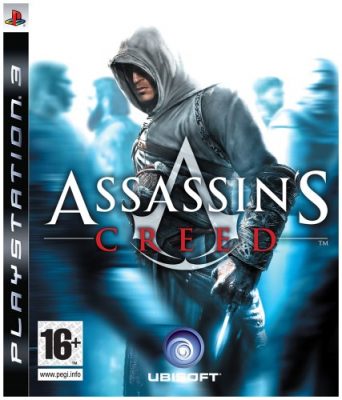 Stinging from his army’s defeat at Acre, he will now allow Richard to humiliate him again.

The Saracens are massing at the ruins of Fortress Arsuf, intending to ambush the Crusaders and prevent them from reaching Jerusalem.

These war manoeuvres have left the rest of the Holy Land wide open.

While Richard and Saladin battle one another, the men left to govern in their stead have begun taking advantage of their newfound positions of power.

It is into this chaotic mess our hero now finds himself thrust. He is ordered to assassinate those most active in their exploitation.

And so Altair begins his missions.

Along the way, however, he will begin to discover that his targets are bound by more than just a shared interest in personal gain.

They seem to share membership in a secret society – a group all too familiar to the Assassins. And they are not simply looking for profit. The true goal and how they plan to achieve it are secrets to be discovered during the course of our story.