With an hour of new cinematics (including footage from the film), Ratchet & Clank (PS4) takes a deeper look at the characters’ origin stories and modernizes the original gameplay.

With an hour of new cinematics (including footage from the film), Ratchet & Clank (PS4) takes a deeper look at the characters’ origin stories and modernizes the original gameplay. Explore the galaxy in a game that features new planets, new and updated gameplay segments, all-new bosses, all-new Clank gameplay, all-new flight sequences, and much more — with completely new visuals built to demonstrate the power of the PS4!

Battle your enemies with an out-of-this-world arsenal, including new weapons and fan-favorite tools of destruction from the Ratchet & Clank Future series. From the brand new Pixelizer (which transforms enemies into explosive 8-bit pixels) to franchise favorites like the dance-party-inducing Groovitron and wise-cracking robotic bodyguard Mr. Zurkon, Ratchet & Clank’s arsenal has never been better.

Help Ratchet and Clank save the galaxy for the first time, again, exclusively on PlayStation4!

This is how PlayStation legends are born – and you’re about to witness it first-hand in a fantastic new way. Closely following the vision of the forthcoming animated movie, relive the laugh a minute tale of how furry Lombax mechanic Ratchet became pals with the rebellious sentry robot Clank.

Spacesuit up for this reimagined, adrenaline charged adventure packed full of new gameplay, bosses and levels not seen in the PlayStation original. Save the galaxy with even more guns and gadgets added to the series’ already inventive arsenal – and enjoy it all with amazing footage from the movie itself and glorious in-game visuals that take advantage of the PS4 system’s world-shaking power.

Whether you’re a long-time Ratchet fan or new to the series, get ready for an unforgettable trip across the universe as their thrilling original space quest is completely reimagined and rebuilt for PS4.

Incredible graphics – thanks to the power of PS4, the dynamic duo’s intergalactic capers look just as good in the game as in the big screen movie itself.

A Guide the Weapons 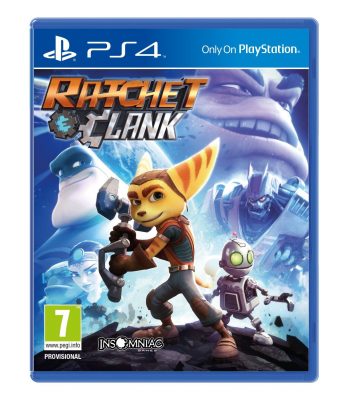 Handy little havoc-causers these: think of the Buzz Blades as a high-speed game of pass-the-parcel, only much more dangerous. Unleash ragged, razor-sharp discs that’ll ricochet around the room, bouncing of walls, enemies and pretty much everything in their way. Chaos guaranteed.

Pull the trigger on your own pop-up party with the Groovitron. Unleashing sick beats and an epic lightshow, catch your enemies off guard while their busy cutting some sweet shapes – just make sure there’s a dancefloor available.

Where would a mechanic be with his trusty wrench? A tool for all seasons, the Omniwrench is perfect mending, breaking or even bashing heads. A life-saver when the ammo starts to run low, but probably not much use against the big guys!

Great for dispatching anybody who’s getting up in your grill, the Pixelizer is your instant gateway to 8-bit heaven. Turn the clock back on your enemies with this close-range cannon and reduce them into a stack of pre-polygonal pixels. Highly effective – and hilarious!

The bigger they are, the… better off you are keeping your distance. With three levels of zoom, this precision rifle is the thinking man’s weapon of choice. It’ll even handily pick-out enemy weak points for you – hit ‘em where it hurts, ranger!

Fight of flight? Why not both? With target-locking technology, the Predator Launcher allows you to unleash a deadly barrage of guided missiles without even pausing to aim. This huge damage dealer will also track multiple targets at once – indispensable in times of peril.

Take on the baaaaad guys in style by transmogrifying them into the humblest of herbivores, a sheep. Yes, as ridiculous, irresponsible and downright hilarious as it sounds, the Sheepinator also boasts unlimited ammo, so what the flock are you waiting for?

Not for the faint of heart, the Warmonger boasts the kind of raw planet-quaking power you’ll need only for the toughest enemies. Keep this gargantuan rocket launcher to one side until you’ll really need it.