Borderlands 3 comes Ten years after Gearbox first took gamers to the chaotic, post-apocalyptic world of Pandora, it’s time to go back for another outing from the iconic shooter-looter Borderlands series!

Borderlands 3 comes Ten years after Gearbox first took gamers to the chaotic, post-apocalyptic world of Pandora, it’s time to go back for another outing from the iconic shooter-looter Borderlands series!

The fanatical Calypso Twins are on the march, attempting to unite the bandit clans of Pandora and claim the galaxy’s most dangerous power.

Only you, a thrill-seeking Vault Hunter (with, perhaps, a little help from a few choice allies) can hope to stop them… While Borderlands could have been a prime candidate for taking down the game-as-a-service route established by the likes of Destiny and Anthem, Gearbox has stuck to its (vast array of) guns and doubled down on single-player action alongside tight co-op. 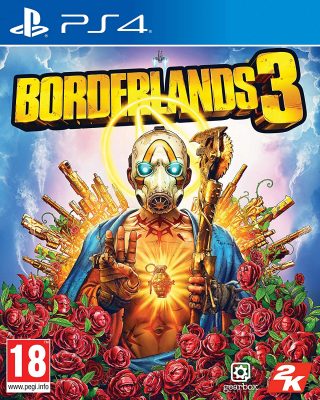 While there’s a lot of ground to cover and explore, the campaign is carefully-crafted with well signposted boss fights and blistering action. That’s not to say the game hasn’t borrowed a couple of tricks from its contemporaries, though: you can now slide down hills, engaging in some frenetic shooting as you go and in a first for a series each of the classes can choose from multiple action skills.

Still, this is a game that has stayed true to its roots. The world of Pandora is large, chaotic and laced with feverish black humour. The action is designed to give you plenty of ‘whoa, that was cool’ moments while the gigantic array of weapons, skills and assorted loot on offer make sure you never settle too deep into the same groove. The hand-drawn cel-shaded art style is back, too, making Borderlands’ environments look as bombastic as ever. Welcome back to Pandora. You’re in for a hellishly good time…