Celebrating over 70 years of family fun, the legendary property trading game Monopoly is hitting Wii in a whole new way!

Get Rich Quick – In this all-new, super-fast version, trade properties and compete in exciting minigames to see who makes the top of the rich list!

Group Play – Up to four players can simultaneously join in on the “rags to riches” fun.;Monopoly Past, Present & Future – The most extensive collection of Monopoly boards all in one package – from the newest ‘Monopoly: Here & Now – The World Edition’ to classic ‘Monopoly.’

Now Boarding – Fill up your passport as you play to unlock new and never-before-seen Monopoly boards. 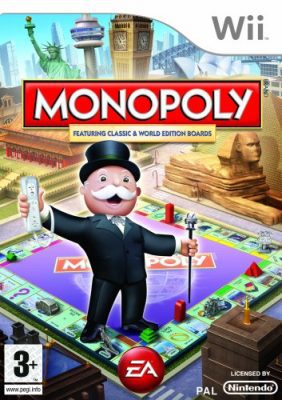 Celebrating over 70 years of family fun, the legendary property trading game Monopoly is hitting Wii in a whole new way! The world’s most popular board game returns in 2008 with ‘Monopoly: Here & Now – The World Edition,’ a modern makeover of the classic game.

With a host of current-day cities and landmarks from all over the world, this new version will let players wheel and deal and compete to own some of the most recognised locales on Earth.

EA brings this exciting new edition of the beloved board game to Wii for the first time along with entirely new features that focus on super-fast play, fun and interactive mini games and four-player simultaneous gameplay.

Players can now host the ultimate Monopoly night with family and friends.