Step into the shoes of rookie cop Chase McCain and take him from zero to hero in LEGO CITY Undercover: The Chase Begins, for Nintendo 3DS and Nintendo 3DS XL! Chase is the new boy in town and is out to impress his formidable boss, Chief Gleeson, head of the LEGO CITY Police Department. His first missions will see him hunting down hoodlums in his neighbourhood area, but it’s not long before he realises there’s more to the LEGO CITY crime underworld than meets the eye and embarks on an epic quest to bring justice to the whole city!

LEGO CITY Undercover: The Chase Begins is the prequel to Wii U title, LEGO CITY Undercover, with a completely different storyline. Explore the open world of LEGO CITY as you go undercover to make the crucial arrests of the city’s crooks. Adopt a wide variety of different disguises, each giving Chase special abilities, in order to access different areas of the city, and complete the various missions you’ve been assigned. Chase’s police officer status means he can commandeer over 50 different vehicles by just jumping in and taking the wheel… and we’re not just talking cars, but air- and water-based vehicles too!

Engage in dynamic hand-to-hand combat with many of your foes and look out for Super Bricks to activate giant LEGO structures called Super Builds that form right before your eyes! As well as the main missions, there are plenty of other activities to undertake and collectibles to unlock that are completely unique to this handheld game. The features of Nintendo 3DS also come into play – call up your Scanner from the Touch Screen and use the motion sensors to analyse the LEGO CITY environment for clues, as if you were really there. You can also share various collectibles with other LEGO CITY players using the StreetPass function.

So what are you waiting for? Dive into a hilarious blockbuster of a LEGO adventure and ensure our hero becomes a crime-busting legend! Enjoy the prequel to Wii U LEGO CITY Undercover as you take on a completely different adventure! 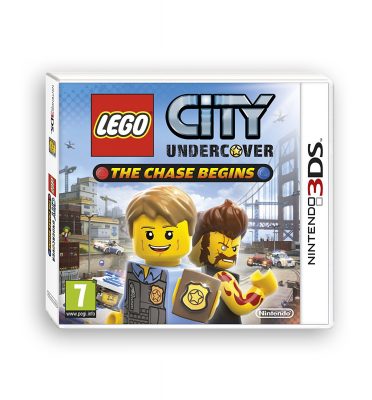