Just in time for the Deadpool 2 Movie Release we have some great Merc Merch with this awesome Official Marvel Deadpool Head stand, great for VR Headsets, Headsets, Headphones, Hats and pretty much anything else you want DP to hold for you 🙂

Just in time for the Deadpool 2 Movie Release we have some great Merc Merch with this awesome Official Marvel Deadpool Head stand, great for VR Headsets, Headsets, Headphones, Hats and pretty much anything else you want DP to hold for you 🙂 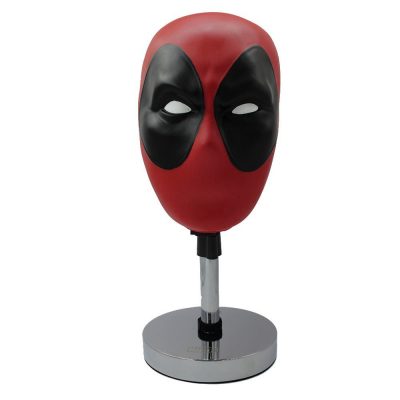 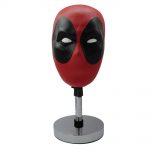 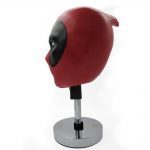 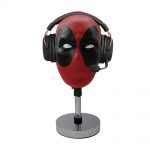 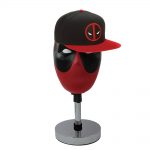 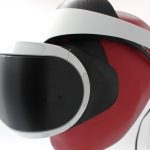 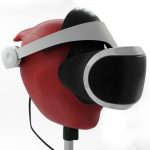 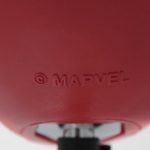 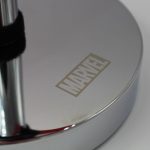 Wade Wilson’s early life is mostly unknown. His mother died of cancer while he was young and his father (who was in the military) was physically abusive. Wade was a deliquent in his teenage years, possibly to spite his father. However one night while drinking with his friends his father attempt to take him out of the club one of his friends stole Wade’s Fathers handgun and killed him. Following a brief stint of military service, Wade began his mercenary career while still in his late teens. Accepting assassination jobs only against those whom he felt deserved death, he made a habit of using plastic surgery and technology to take on a new identity whenever he failed an assignment. Many years later Deadpool’s nemesis T-Ray accused Deadpool of killing his wife and stealing his identity after a failed mission, but Deadpool’s restored memories revealed this to be a lie; in T-Ray’s account Wade was wearing his Deadpool costume, which he didn’t have in till after he joined Weapon X.

Little is known of Wilson’s subsequent mercenary activities. At one point he was active in Tangier, Morocco, where he romanced a woman named Francie. When this relationship soured, he traveled throughout Asia, and was hired in Japan by a crimelord, the Boss, to infiltrate a sumo-wrestling ring owned by a rival criminal, the Oyakata. Wilson spent three years as a wrestler under the Oyakata’s tutelage and became romantically involved with his mentor’s daughter, Sazae. When the Boss finally ordered the Oyakata’s murder, Wilson refused to complete his assignment, allegedly the first time he had ever done so, and relocated to the United States.

In America, Wilson met and fell in love with teenage prostitute Vanessa Carlysle, with whom he shared dreams of a better life. Wilson was subsequently hired by Middle Eastern interests to assassinate a blind British government operative named Althea, also known as Blind Al, but upon arrival at the Zaire base where she was stationed, he killed everyone except for Al who had fled. Wilson’s employers sought vengeance for his failure by targeting Vanessa, who was rescued by Zoe Culloden, an employee of the interdimensional firm Landau, Luckman, Lake, and LeQuare. Culloden was keeping Wilson under surveillance, believing he was destined to play a vital part in a potential threat to the world.

Learning that he had contracted cancer, Wilson broke up with Vanessa rather than force her to remain with a terminally ill man. In Canada, he was offered hope in the form of Department K, a special weapons development branch of the Canadian government. Wilson became a test subject in Department K’s branch of the joint U.S./Canadian superhuman enhancement project, the Weapon X Program; his cancer was temporarily arrested via the implantation of a healing factor derived from another Department K agent, the mutant adventurer Wolverine. Wilson was active in a covert field unit alongside the near-invulnerable Sluggo and the cyborgs Kane and Slayback. Vanessa herself was later affiliated with the team after having manifested mutant shapeshifting abilities, calling herself Copycat.

During one mission, Wilson killed his teammate Slayback. As a result, he was rejected from the Weapon X Program and sent to the Hospice, allegedly a government facility where failed superhuman operatives were treated. However, unknown to the Canadian government, the Hospice’s patients served as experimental subjects for Doctor Killebrew and his sadistic assistant Ajax, with the patients placing bets in a “deadpool” as to how long each subject would live. Killebrew subjected Wilson to various torturous experiments for his own deranged satisfaction. In due course, Wilson formed a semi-romantic relationship with the cosmic entity Death, who regarded him as a kindred spirit. Wilson’s emotional strength during his trials earned him the respect of his fellow Hospice patients. Then Ajax, angered by Wilson’s taunts, lobotomized one of Wilson’s friends. At Death’s prompting, Wilson killed his friend to end his suffering. However, under Killebrew’s rules any patient who killed another was to be executed; Ajax subsequently tore out Wilson’s heart and left him for dead, but Wilson’s thirst for vengeance was so strong that it jumpstarted his healing factor, regenerating his heart, although not curing his scarred body. Wilson then attacked Ajax, leaving him for dead in turn, and, taking the name Deadpool, escaped from the Hospice with his fellow patients.

Following his escape, Deadpool served for a time as an enforcer alongside the surgically altered criminal Hammerhead. He soon returned to his freelance mercenary activities, donning a costume in keeping with his new identity. At some point during his mercenary career he was employed as an assassin by Wilson Fisk, the Kingpin of crime. He also clashed with Wolverine, at that time a spy for the Canadian government. Also, at some point during these years, Deadpool caught up with Blind Al and kept her a prisoner in his home. Al’s attempts to escape only resulted in death for those whose help she sought, leaving her no choice but to resign herself to captivity.

Some years after escaping the Hospice, Deadpool, perhaps seeking compensation for the injuries inflicted upon him by Killebrew, returned to the Canadian government and was treated by Doctor Walter Langkowski, the bestial Sasquatch of Canada’s super-team Alpha Flight. Deadpool soon found government work unsuited to his temperament, and he abandoned this endeavor. Hired by the criminal genius known as the Wizard, Deadpool at first went to the wrong address and received a job impersonating the criminal Hobgoblin. When again contacted by the Wizard, he joined with fellow criminals the Taskmaster and the Constrictor in a short-lived version of the Frightful Four. When this plan also failed, Deadpool sought to reclaim his position as the Kingpin’s assassin, only to be challenged by fellow assassin Bullseye. Deadpool began frequenting the mercenary hangout called the Hellhouse, where the diminutive Patch issued assignments. There he clashed with T-Ray, a sorcerer and assassin to whom he took an immediate dislike. He subsequently found employment with the time-traveling arms merchant Tolliver, in whose service he was reunited with Sluggo and Copycat. Unbeknownst to Deadpool, Tolliver subsequently sent Copycat to impersonate another mutant mercenary, Domino. Deadpool also recruited a man named Weasel to act as his weapon supplier, and the two became fast friends.

After some time in Tolliver’s service, Deadpool was sent to kill Cable, the mutant soldier from the future who was in fact Tolliver’s father and in whose company Copycat was impersonating Domino. However, Deadpool met defeat at the hands of Cable and his new charges, the young mutants in training known as the New Mutants. When Cable reorganized the New Mutants as X-Force, Tolliver was seemingly slain in battle with them, setting off a search by his various mercenaries for the advanced technology he had left behind. Deadpool’s participation in the search was interrupted by the surprising interference of Slayback, who had cybernetically reconstituted himself after being slain by Deadpool and was eager for revenge. In the course of the ensuing battle, Copycat was gravely injured, and Deadpool sacrificed part of his healing ability to save her life.

Deadpool subsequently helped X-Force member Siryn against the unstoppable Juggernaut and her uncle, Black Tom Cassidy, who had forced Killebrew into their service. Deadpool developed a strong attachment to Siryn, who only partially returned his feelings. Unsure of his worthiness, Deadpool sought out Copycat, only to find she was now dating Kane. Deadpool fought both Kane and Wolverine, who had been sent to check on Kane by a mutual friend. Deadpool was subsequently abducted by information brokers seeking a cure for the Legacy Virus but was rescued by Wolverine and the mutant mercenary Maverick.

Soon afterward, Deadpool was approached by Zoe Culloden of the rechristened Landau, Luckman, and Lake who believed he was destined to be the Mithras, one who would help usher in a golden age for Earth. Skeptical, Deadpool turned her away, only to be hit with a string of personal failures, including the alienation of Weasel and Blind Al. Hoping to turn over a new leaf, he found that killing was not so easily left behind when, at the behest of the ghosts of his former Weapon X inmates, he killed Ajax. He hoped to move forward by accepting Culloden’s offer, only to be dismayed when he learned that his destined role was to kill Tiamat, a potential threat to the arriving “Messiah.” Deadpool instead killed the Messiah when he learned that it brought not true peace but mindless bliss instead.