It’s a Summers family reunion! Cyclops, Jean Grey, Professor X, and Cable’s son Tyler face off against the resurrected Stryfe- in control of Cable’s body! Can these telepathic titans save Cable from Stryfe’s control…or will Cable have to pay the ultimate price for him to be stopped?

Stryfe has found Tyler Dayspring and the two try to emotionally joust one another. Stryfe loses, however, when he triggers Tyler’s ability to project the truth from someone’s mind, that person being the time-traveling Askani. Not knowing what to believe, Stryfe is accosted by a psi-attack and is given the choice to do something good with his life. He leaves Cable’s body. 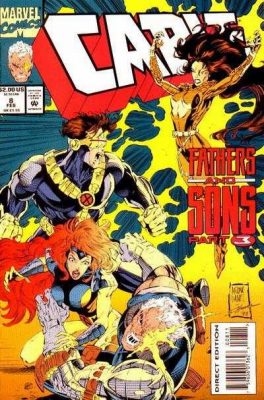 Stryfe bullies Tyler Dayspring around until Tyler reveals that Stryfe isn’t the actual son of Cyclops and Jean Grey. Stryfe can’t believe what he hears and the trapped Askani confirms Tyler’s assertions. Stryfe destroys Askani’s form. Askani had been linked to Tyler, who has the ability to project the thoughts of others. He shows Stryfe the truth of his past.

Meanwhile, Zero has found Professor Xavier, Cyclops, Jean Grey, and Domino. Zero confirms their fears that Cable’s body has been wholly possessed by Stryfe. Zero then explains how this came to be: When Cable and Stryfe were sucked into the time vortex on the Moon Stryfe’s body was destroyed. His mind, however, found refuge in Cable’s since their bodies had been so similar. Xavier reckons that Mr. Sinister was able to release Stryfe from inside Cable’s mind.

Zero teleports the four mutants to Tyler’s citadel where Stryfe is getting a lesson in history. He can’t believe that his entire life has been a lie. He watches as his infant body is referred to as the clone; he sees Apocalypse claim his infant body as his own; he recognizes that he has been wrong about his heritage his whole life. Xavier enters Stryfe’s mind with his crew and they see Stryfe’s harsh upbringing. They see the pain both Stryfe and Cable endured just to be able to make it to the present. The form of Askani enters Stryfe’s mind and convinces him that letting go of Cable is the only way to begin to turn Stryfe’s life around. Stryfe finds irony in this and agrees to do so as a last cruel joke. Cable awakens as himself and simply gets up to leave to clear his head. Cyclops begs him to stay. Cable does so and asks about Madelyne Pryor, whom he has recently learned to be his true mother.