It’s Cable versus G.W. Bridge! Plus, what will a newly-reunited Six Pack decide to do with Cable?

Cable and G. W. fight before making up. Domino is searching for X-Force. Cable finally mets up with Six Pack. They blame Cable for all their troubles with Stryfe.

Note: Page 28 has speech bubbles pointed at Kane and Cable but both belong to Hammer.

Cable and G.W. Bridge are at odds again. Cable and Garrison had just arrived at the Switzerland safehouse and had found Bridge waiting for them. Before Cable could put a hole in Bridge’s head Bridge mentioned that he knew how to find X-Force. This has lead to the current fist fight. The men exchange blows while Kane fixes up a pot of coffee. As the battle goes on, Bridge accuses Cable of many of the same things that Kane had beef with months prior (though really a year to him since he’d been in the future that long). Kane finally steps in and states as much and explains that Cable is trying to make things good again; they’ve brought technology back to help their old comrade Hammer walk again. This stops the fight and Cable and Bridge shake hands on a truce.

On the information provided by Copycat concerning X-Force’s last base of operations, former Six Pack teammates Domino, Grizzly, and Hammer fly to the Adirondack Mountains with Copycat in tow. Hammer accesses schematics for the base (it was Trask’s old Sentinel compound) and confirms Copycat’s claim that living space does exist under the mountain. Hammer lands the Winnebago as Grizzly explains that his old team Weapon: PRIME attacked X-Force here recently when the base exploded. Domino is furious when she learns that Copycat knew the base would be uninhabitable and she moves in for the kill. Copycat buys herself more time by explaining that they can tap into any functioning computers to track X-Force. Grizzly pounds his way through the rubble until the team breaches the buried base. The search for a computer.

In Switzerland, G.W. relates the story of the fight he recently had with X-Force on Graymalkin. He then states that Cannonball jettisoned major portions of off Graymalkin before the base exploded. Cable can’t believe that Graymalkin is destroyed. Cable asks his computer to find Graymalkin. It can’t, but Cable knows that if the computer responds then Graymalkin must still be in operation. To find the answer to this odd conundrum Cable needs to find his X-Force team. Kane suggests they find Domino to rejoin their Six Pack group and G.W. mentions that she’s already started that endeavor by hooking up with Grizzly and Hammer. Cable is disturbed. His last request to her was to find X-Force. If Hammer is with Domino then he’ll be able to use Cable’s stuff to find Cable and exact revenge.

In the South Pacific, Sinsear scans frequencies until he hears Cable’s search for Graymalkin. He hasn’t found his target yet, but it seems that he’s found the father.

Hammer flies his Winnebago to Camp Verde in Arizona. The group has followed X-Force’s mutagenic signatures to this location but doubt their information since the place looks like a graveyard. Hammer indicates that some activity has been going on underground. Grizzly, Domino, and Copycat head below and get jumped by Cable, G.W., and Kane. Upon seeing Cable, Copycat runs and embraces him. Cable is flabbergasted and asks if he knows her. Copycat explains that she was Domino. Cable doesn’t know how to respond to this and explains that he never knew that that Domino wasn’t really the Domino he knew. He pushes Copycat away and gruffly exclaims that he doesn’t know her. Cable moves the group topside to talk to Hammer while Copycat stays behind and cries, as she thought she’d had something special with Cable.

Topside, Hammer blasts Cable as soon as he sees him. He guides the Winnebago to grab Cable with some mechanical tentacles. Hammer exclaims that he is going to render Cable dead from the neck down, just as Cable did to him. Kane tries to reason with Hammer by telling him that Cable has acknowledged his past errors, as well as the fact that they’ve brought some futuristic tools with them to help Hammer walk again. Hammer eventually lets Cable go and looks at the blueprints for an overhaul of his nervous system. Hammer is sure it will work but refuses the procedure on the policy that he doesn’t want to become another mirror image of Cable.

The group then tries to decide their next move. Copycat has escaped and Domino is raring to go after her. G.W. asks Cable if the group should get back together. There would be one condition, however, and that’s that Cable comes clean and promises no future secrets; no personal missions. The group decides that it can work together, just not with Cable. Six Pack loads into the Winnebago and flies off in pursuit of Copycat while Cable is left behind in Camp Verde. 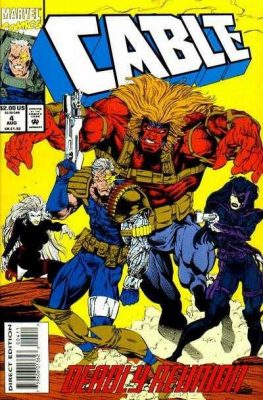