Characters from the movie “Pulp Fiction” appear in the background at the airport once the fight is over.

An old friend of Professor X flees Genosha to bring him dire news, but Genoshan magistrates Pipeline and Hawkshaw attempt to bring her back, no matter the cost! Can Cable and X-Force fight them off and learn her dark secret?

Cable and Domino meet Rictor at the airport to wish him well in Mexico. As they leave, a mob forms around some Genoshans. The mob is aggravated by two men looking to abduct a fleeing Genoshan scientist. Cable intervenes and rescues the doctor. Domino later learns that a friend of hers may be responsible for deaths in Colorado.

Note: Characters from the movie “Pulp Fiction” appear in the background at the airport once the fight is over.

On a flight from Genosha to the United States, Dr. Renee Majcomb puts the finishing touches on her fake passport. She is escaping Genosha and hopes to speak with Professor Xavier about the current events in the war-torn country. She is unaware that Hawkshaw and Pipeline have followed her and intend on taking her back to Genosha.

In the airport, Cable and Domino get through security so as to see Rictor off to Mexico. They lightly discuss Cable’s distrust of certain media outlets after Domino reads a tabloid about a “mutant bigfoot” serial killer.

Rictor and Shatterstar arrive to the airport later than hoped and try to hurry to Rictor’s gate. They get stopped at security, however, when it is revealed that Shatterstar has his swords in a case. They leave the swords and rush to catch the plane. As they go, they note several displays of anti-Genoshan picketing. They brush it off and meet Cable at the gate. Cable tries to empathize with Rictor and assures him that he is welcome back any time. Rictor boards his plane and is soon gone.

Cable and Domino invite Shatterstar to ride back with them. As they collect Shatterstar’s swords from security, an alert goes out regarding a problem with the protesters. The three head to the scene and Cable does a very taxing scan of group. He finds that the source of the confusion and agitation is two men trying to make off with Dr. Majcomb. Cable telekinetically takes out Pipeline’s teleportation device and Shatterstar foolishly leaps into action. He is shot, but Cable and Domino are able to back him up and take the two down.

During all the excitement, Cable had saved a security guard. This guard is completely stunned that a mutant would help a human. Dr. Majcomb agrees to stay behind and give statements to the authorities so that Cable can get Shatterstar some medical help.

That night, Domino stays up late to watch the news. Trish Tilby reports on further slayings in Colorado and a new facet of the story. A man found a footprint of a very large… something. Domino knows that print; it belongs to a friend of hers. 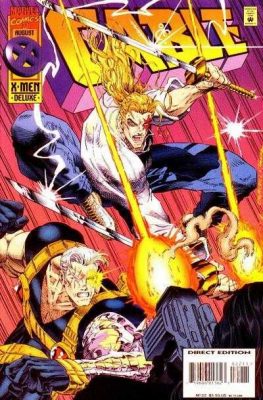