Stranded in the Florida swamps, Cable and Lee Forrester struggle to survive! And if that’s not enough, finding shelter in a small cottage only leads them to more despair!

Cable and Lee escape from a hurricane, but the house they find is not the shelter they want. Seemingly the abode of a kind old man, both Cable and Lee begin seeing some of the most depressing scenes from their lives. Unfortunately for them, they have wandered into the home of D’Spayre, a being that feeds off the fear in the lives of others. But it seems as if it were all a game because Belasco appears to stop D’Spayre and recruit Cable to take down a common enemy. 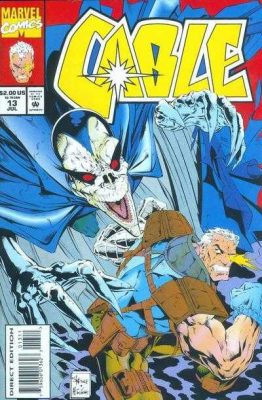 As Cable and Lee Forrester hike through the Everglades, a storm develops and sends the duo looking for shelter. Cable falls into some quicksand and has to use his telekinesis to free himself. This completely tires him out; fortunately, a house is soon found to pass the night.

Desmond, an old man that lives in the house, welcomes the two travellers. As the night passes, Desmond lets on that he knows an awful lot about Cable and Lee, even going so far as to drop their full names.

Cable senses that something is amiss and attempts to bully Desmond into giving some answers. Instead, Cable has the memory of his wife’s death and son’s betrayal play out in his mind. Cable collapses to the ground as another individual enters the cabin. This man is named Lucas and he comments that he wanted to be present for the game before sending Cable and Lee off to bed.

Lee puts a despondent Cable to bed and notes her misgivings about the two men. In her room, her dad enters and proceeds to shoot himself in the head – the very way he had died after being tormented by a demon.

Lee tries to run away from this memory and runs headlong into Cyclops and Magneto, two men she once had feeling for. Meanwhile, Cable sees visions of women in his life that have never stayed: Jenskot, Redd, Jean Grey, Rachel Grey, Mother Askani. He finds Lee, but his form is changed into that of Stryfe’s. Desmond shows up and explains that Stryfe integrated his consciousness into Cable’s and that devastation would surely come to pass if Stryfe were to become the dominant force in Cable’s head.

Desmond drops his human form and reveals himself to be D’Spayre, a demon that gets his powers from the depression of others. Cable is racked with his memories but is able to fight through them to declare that he fears things, but he does not let that fear control him.

To prove his point, Cable kisses Lee. D’Spayre threatens to destroy the two, but Lucas steps in and claims Cable and Lee as his own. Lucas drops his human form and reveals himself to be Belasco, a fallen demon. He needs Cable’s help in defeating a mutual enemy.