Omega Red is on a murderous rampage, and to stop him Cable must team up with…the Acolytes of Magneto!? But what is Omega Red after? And can Cable even trust the Acolytes not to betray him?

Omega Red is on a murderous rampage, and to stop him Cable must team up with…the Acolytes of Magneto!? But what is Omega Red after? And can Cable even trust the Acolytes not to betray him?

Cable joins with the Acolytes to hunt Omega Red down at the former arctic base of Magneto. Cable gets a shock, however, when he learns that the Acolytes aren’t really after Omega Red. 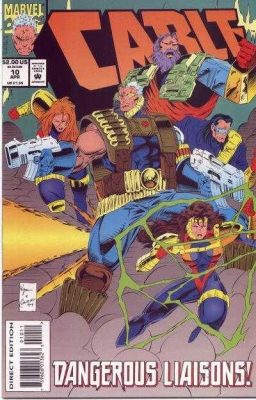 Omega Red visits the research lab of Director Lashniev, home of Project Epsilon. After killing everyone but the Director, Omega Red coerces Lashniev to give him certain protocols that may stem the death spore which ravages his body. Lashniev is hesitant but finally downloads the information after getting thoroughly beaten.

Cable and a few Acolytes land a few minutes later and they are met by angry troops. The Acolytes start wasting these guards until Cable forcibly insists that they stop. Milan finds Lashniev and hooks up and sees that Omega Red was in fact just there. The Acolytes fear that Omega Red may be headed to Avalon to perform his lifesaving experiment. The only access point from Earth is at Magneto’s base at the Arctic. Cable travels with the Acolytes and stakes out the base.

As the team figures how to penetrate the base, Cable takes Katu aside and asks him how he can align himself with these Acolytes. Katu explains that he was an Inuit fisherman in Russia. He had a family and lived a peaceful life. Unbeknownst to him, his mutant power of redirecting transmissions was affecting Russian satellites. An ops team arrived and wiped out Katu’s family and abducted him to reconstruct his body for their purposes. This gross act instilled in Katu a sense of revenge.

The group approaches Magneto’s base and reach the outer buoys. Breaching these will cause an alarm so Katu climbs one and blows it up. He uses his powers to redirect the perimeter beams elsewhere while Cable and the other Acolytes approach the base. Voght teleports the group inside and they begin to prepare for Omega Red’s arrival. Cable is surprised to learn that he can open doors by simply asking. Even more surprising is when he asks for the lights to turn on that he finds Omega Red strung up. The ultimate surprise is finding that he’s been ambushed by the entire Acolyte team, as led by Colossus.