Before the Fantastic Four: Ben Grimm and Logan #1 July 2000

What happened when Wolverine and The Thing collided before they donned colorful costumes? This new story reveals all! 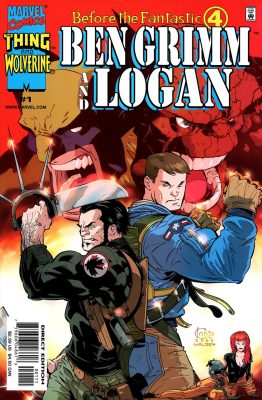 The Marvel Universe is full of tough guys, but they just don’t come any rougher than Ben Grimm and Logan! This action-packed adventure takes place during Grimm’s dangerous days as a test pilot for the U.S. Air Force (before he became the ever lovin’ blue eyed idol of millions) and Logan’s time as a Canadian secret agent (before he became the X-Men’s secret weapon).

Needless to say, they get thrown together during a top-secret mission?but can barely stop beating the tar out of each other long enough to get the job done!

Featuring appearances by Tony Stark, Nick Fury, Carol Danvers and the Black Widow (and that’s just in the first issue), this series sheds light on two of the most interesting (and popular) characters in the Marvel U. during a part of their history we have rarely seen.