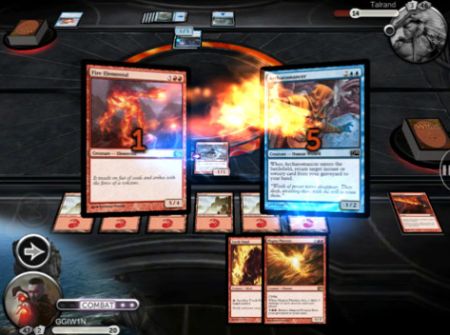 Two creatures up against each other.

Magic 2013: face a greater challenge. That is exactly what you do in this year’s rendition of the Magic: The Gathering video game franchise. If you haven’t played a Magic game before, you shouldn’t have too much trouble learning the basics of the game. Gameplay is fairly simple, and the tutorial takes you through everything you need to know as a new player to the franchise, or a Friday Night Magic veteran, just having a go on the console. After completing the optional tutorial (or just by jumping straight in), you have the option to either play through the campaign (of which there are multiple story lines), or go right to the feature that gets any gamer-MTG fan’s mouth watering: online multi-player. There are multiple game types to choose from, even in campaign mode. There is your standard game, which is one on one, with each combatant controlling one simple deck. Then, there is Two-Headed Giant, which is a 2v2 style game. There is also Planechase, which ups the ante by pitting you in a 3v1 battle, on the outnumbered side. While Planechase may sound overwhelming, your odds of winning aren’t as bad as you think. During my hands on experience with Planechase, I often found myself satisfyingly on the victorious end of things. In addition, Magic 2013 introduces 10 all new decks to play with. Each deck has up to 30 unlockable cards, and each game you win gives you a new card in the set. There is also a Custom Game mode where you can play with a computer and/or against a computer in a non-campaign setting, and for those of you wondering, yes. Custom Game victories can yield card unlocks. 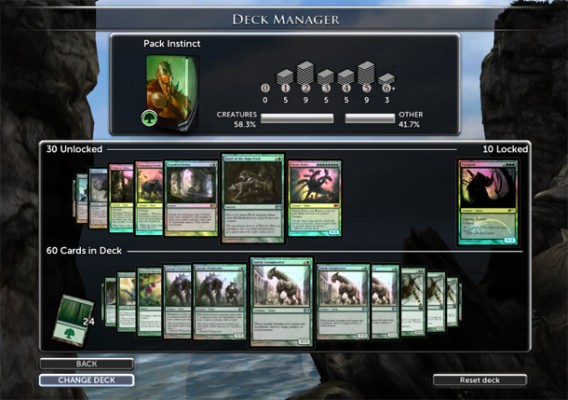 Your opponents in Magic 2013 are formidably stronger than in Magic 2012, but I found that the challenge did nothing to detract from the overall experience of the game. In fact, the challenge only made it that much harder to put down the controller. In the end, there is such a vast multitude of content to explore amongst the game modes, how you approach Magic 2013 is all up to how you want to play, and Magic 2013 does a great job of giving you everything you need to get started. If you have played the other Magic games, especially 2012, then this is a game you will enjoy immensely. Even for newcomers to the franchise, this is a must have game, and with it being only an 800 MSP purchase on the Xbox Live Arcade, it is more than worth the money. There is also a free trial of the game available for download on XBLA as well for those of you who want to have a taste before you buy the whole meal. If you do choose to purchase the game, there are 20 achievements currently available worth 200 gamer points. It doesnt sound like much, but DLC will soon surely add to. Overall, I would give this game a 10/10. It hits every mark exactly the way it should for the type of game that it is. Kudos to Wizards of the Coast for developing yet another great video game to satisfy our MTG appetite.