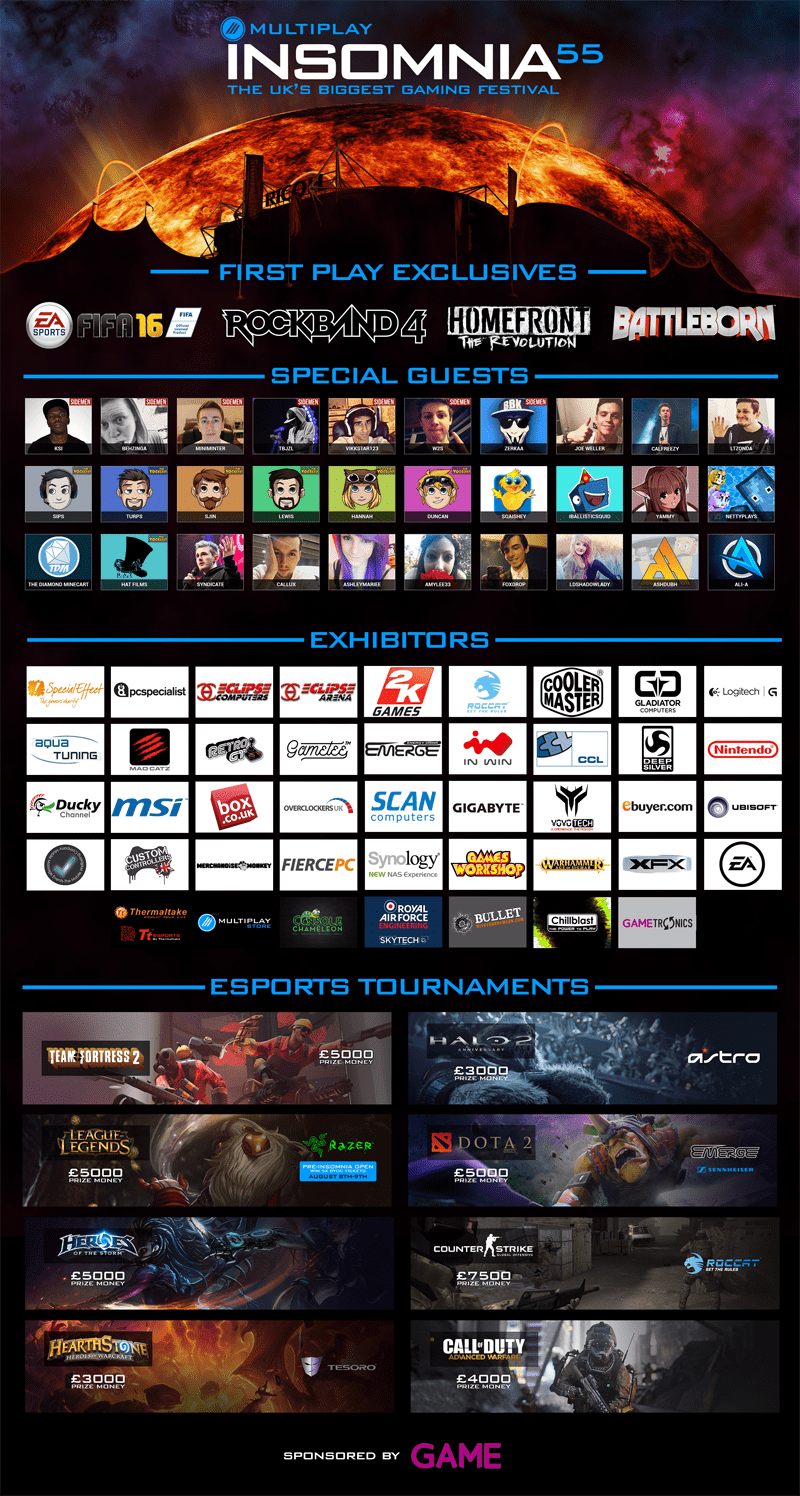 Multiplay, organiser of the UK’s largest and rapidly growing gaming festival Insomnia, is delighted to unveil the final line-up for Insomnia55. Featuring the UK’s biggest line-up of eSports tournaments, live shows from Youtube’s biggest stars and the most anticipated games of 2015, Insomnia55 will be the biggest and best Insomnia festival to date at the Ricoh Arena from August 28th-31st.

Insomnia55 brings attendees closer to the action than ever before, with Microsoft’s stunning Gears of War: Ultimate Edition introducing the original Gears to a whole new audience, while longstanding fans of the 3rd person shooter will relish this remastered classic. Microsoft’s presence doesn’t end there; with Forza Motorsport 6 showcasing the racing enthusiast’s dream of high-octane thrills in some of the world’s most sought after cars.

Nintendo makes its Insomnia Gaming Festivals debut, where Fans of Splatoon can hone their skills in preparation for tournaments taking place throughout the weekend. Gamers with a creative streak can realise their vision with Super Mario Maker and fans excited to take control of Fox McCloud once again will be delighted with the addition of Star Fox Zero to Insomnia55’s exhibition floor.

Complementing Insomnia’s biggest ever games line-up which includes first plays of FIFA 16, HomeFront: The Revolution, Battleborn and Rock Band 4, Insomia55 also features some of the most loved Youtubers. From Yogscast, Lewis, Sjin, Duncan, Sips, Hannah, Martyn, Hat Films and Turps will be sharing some of their unique insight into gaming culture, while stars such as Syndicate and The Diamond Minecraft return after attending previous Insomnia festivals.

First-person shooter enthusiast Ali-A attends for the first time this year and The Sidemen return, featuring KSI, W2S, Vikkstar123, Behzinga, Zerkaa, Miniminter and TBJZL; bringing their unique sense of gaming-focused humour to the event. With Kwebbelkop, Slogoman, The Gaming Lemon and Jelly also attending, Insomnia55 will be the best place to see your favourite stars. 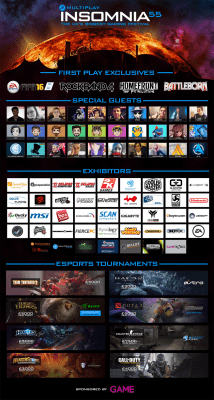 “We’re delighted to bring an amazing line-up of publishers and incredible games, playable for the first time to Insomnia55,” said Craig Fletcher, Founder and CEO of Multiplay. He continued, “With our already announced special guests, including the biggest stars of YouTube, and the UK’s biggest line-up of eSports tournaments, Insomnia55 has more content than ever before, offers more choice to our community, and invites new fans to experience the Insomnia Gaming Festivals for the first time.”

The impressive growth of the Insomnia series sees Insomnia55 expand with four external Marquees raised to provide an additional 8000sqm space for the UK’s biggest and fastest growing gaming festival.

Founded in 1997, Multiplay is a gaming services company specialising in online hosting, events management, esports and more. Multiplay’s unique service and Clanforge® platform enables individuals and businesses to host video game backend services with the very best performance at all times. With support from a dedicated 24x7x365 technical infrastructure team and over 26 locations available worldwide, Multiplay provides an unparalleled online hosting experience for gamers across the globe.

FIFA 16
Fans of the world’s biggest selling sports franchise can play EA Sports’ FIFA 16 for the first time in the UK at Insomnia55, and with innovations such as 12 national women’s teams, new training games in Manager mode, and a host of improvements to the ever popular Ultimate Team, there’s no better place for a FIFA fan before release.

Homefront: The Revolution
Homefront: The Revolution is a first person shooter, developed by Deep Silver Dambuster Studios and published by Deep Silver. Set four years after the original Homefront, gamers take on the role of Ethan Brady as he begins a resistance movement against the unforgiving Korean army as it moves on the U.S city of Philadelphia. With the multiplayer beta launching later in 2015, Insomnia55 is the first chance for fans of the series to get hands-on with the game in the UK.

Battleborn
Set in the distant future, Battleborn is a first-person shooter featuring 25 unique playable heroes who form an unlikely alliance to save the last star in the universe from a mysterious enemy hell-bent on its destruction. Battleborn’s narrative-driven story mode can be played alone or co-operatively by up to five friends – split screen and online. The game’s three different competitive multiplayer modes can be played by up to 10 players online in action-packed 5v5 matches.

Rock Band 4
Rock Band 4 from Harmonix is the ultimate band experience. Be the guitarist, bass player, drummer, or the singer as you play your way to stardom and light up the stage. With the most comprehensive track list available at launch, and with over 2000 tracks available after launch from previous Rock Band titles, Rock Band 4 is the definitive music fantasy, and is playable to the public in the UK for the first time at Insomnia55.

Previous: A Gamers Guide to Gaming
Next: NEW GAMES AND PRE-ORDERS