Coffin Dodgers has spent four months in beta after launching at San Francisco’s GDC earlier in the year, winning more than 14,000 pre launch players and supporters around the world.

Coffin Dodgers is Milky Tea’s second major direct to consumer product; a dark comedic Kart Racing game set on the mean streets of a 3D retirement village. Here you have to help save one of seven old retries and race around an 3D open world on a “pimped-up” mobility scooter, battling the Grim Reaper who is out to harvest souls. The game is aimed at people who love animated TV shows like Family Guy, The Simpson’s, and games like Mario Kart.

Besides the storyline and the open 3D world some of the unique features of this karting game include player-to-player combat and rag dog physics. Here players can actively battle and knock opponents from their scooters and get tangled up in epic crashes and mayhem. 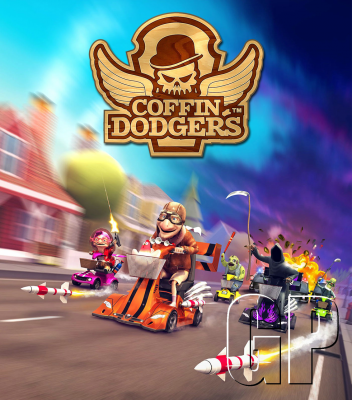 It was one of the fastest games to succeed on Steam’s Greenlight, where the community approves the games it wants to play before they can be released. Coffin Dodgers was approved in just 9 days with 5,000 yes votes and ended up as a top 100 Greenlight of 2014.

The game launched in full on 8th July 2015 on Steam and through its new partnership with Miami based Alienware, the game will be featured at Comic Con in San Diego between 9-12th July.

Jon Holmes, Founder and Managing Director of Milky Tea, says the response from gamers has been overwhelming. “We’ve been receiving 90% positive feedback and great reviews from players all around the world while in beta, which has really boosted the confidence of the team.”

Milky Tea, the team behind the Lloyds TSB adverts in the UK (think long nosed character animations), have worked on Coffin Dodgers for just over 18 months with the help and support of Creative England and a number of influential companies worldwide.

The Milky Tea team aren’t novices at making games, oh no, they have been making games for over seven years for big names such as the BBC and been nominated for an Emmy and BAFTA awards.

“Developing our own IP has been a natural development. People are looking for something fresh and new and we wanted to bring our storytelling, art and animation experience to games. We have our own spin and ingredients that we apply to our games that we feel sets us apart. Everything we make isn’t just a game, they must have the potential to work as an animated TV shows, range of vinyl toys or even as a storybook straight from the off ”

Developing their own IP has seen the studio have greater independence and be able to adapt much more quickly as the marketplace evolves.
“We are based in Liverpool which is the second fastest growing digital economy in the UK, behind only Bournemouth and we’re seeing more investors knocking at our door looking for interesting and innovative ideas. There’s a buzz as you see more firms start up here and more investors and venture capitalists come to see what and who they can support. Our aim is to now build a portfolio of 4-5 new IP’s over the next 4 years and we are actively looking for partners to help u get to that next level.”

About Milky Tea Studio
Milky Tea is an award winning, independent creative production studio established in the UK in 2005. The studio was set up to bring the best in 3D, gaming, animation, design and digital talent together under one roof to produce breathtaking creative content. We design and craft computer generated characters, worlds and graphics, and through animation, illustration and game development we bring to life and communicate great stories that inspire peoples imagination.
It is our belief that everyone has a great story to tell and it is our job to help you tell yours. Our client base includes some of globes biggest companies and agencies such as Lloyds TSB, Sony, BBC, Unilever, Toyota, Kraft, Bose, Nestle, Saatchi & Saatchi, Ogilvy, RKCR/Y&R and Adam & Eve to name but a few.

Now on XBOX ONE